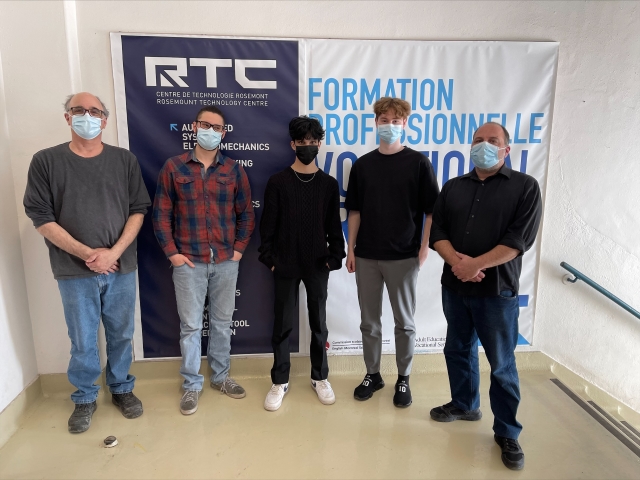 The Skills Canada National Competition is billed as the “Canadian Olympics” for trade jobs and technology. Over 300 competitors from across the country will participate in more than 35 skilled trade and technology competitions, the lone such event for students and apprentices nationwide.

The biannual event, to take place in Vancouver this May, will feature three Rosemount Technology Centre students this year, who will be eagerly representing their school, the EMSB and the province of Quebec.

“I was pretty excited when I found out the news,” said Sebastian Chiarenza, a cabinetmaking student bound for the nationals. “It’s an experience that not many people have and an amazing opportunity to improve upon our skills”

It has been a whirlwind few weeks for the group, having learned about their retention for the event only toward the end of March.

“We scoured the whole department and found the very best we could find,” said Mr. Curiale.

The group is scheduled to arrive in Vancouver on May 24.  Orientation activities, a reception and the official Opening Ceremonies will take place on May 25, followed by two gruelling six-hour competition days on May 26 and 27 at the Vancouver Convention Centre. Closing Ceremonies will be conducted on May 28 to highlight the winners in all Skill Areas and categories and award them their medals. Should the students perform well in Vancouver, there is also the potential for them to qualify for the WorldSkills international event later this year in Shanghai.

While much of the itinerary will be focused on the competition itself, interactive demonstrations, visits with industry celebrities and exclusive networking events are offered to participants.

“It’s great to meet teachers from other provinces and see what they are doing,” said Mr. Honce. “You meet so many people from different cultures. It’s great to communicate and network.”

With the competition set to kick off in less than two months’ time, the students have begun their preparations in earnest. Many long evenings at the school have been already spent going over competition guidelines and requirements, as well as exploring ways they can get a leg up on their competitors.

“We are going to give them tricks of the trade, and things to look at in order for their design to be processed quickly and accurately,” said Mr. Curiale. “Their technical skills are going to be pushed.”

Slater and Tartamella say they have been becoming increasingly comfortable with software such as InDesign, PhotoShop and Illustrator ahead of the competition. Other skills, such as working under a tight deadline, are also on the menu.

“We haven’t been pressured with being under the clock so far,” said  Mr. Tartamella. “To succeed in this competition, you have to become accustomed to working a lot faster as opposed to at your own pace.”

The school’s Vice-Principal is excited for the opportunity bestowed upon his students and staff.

“Rosemount Technology Centre is proud of the students and the staff,” said Ruben Azevedo. “To have the chance to participate is great for the EMSB and the Adult Education Vocational Services (AEVS). I am really happy to have a chance to take part this year.”

Sep 08, 2022
EMSB Open Houses Return to In-Person Format
Both elementary and high schools across the EMSB are...
Read More

Aug 31, 2022
On behalf of the Directorate
All EMSB school personnel have been eagerly awaiting the...
Read More